It is with deep sorrow that we announce the sad and untimely death of our dear friend, Courage. Until his death, Courage has been living in our hearts from birth. He will be joining his kin faith, hope, trust, optimism, confidence self-belief, sacrifice who passed on a while ago. Courage leaves behind fear, self-doubt, limitations, cowardice, timidity and faint-heartedness.

Courage will be remembered for energizing many hearts to keep believing even when all hope was lost. He was there when we were fighting for our independence. He made the freedom fighters intolerant of injustices that were happening at the time. It is because of him that the freedom fighters sacrificed their lives and took an oath not to relent until the generations that would come after them were free to be whoever they wanted.

Courage will also be remembered for leading men and women into fighting for democracy in Kenya. He is the one who kept them from giving up when they were tortured and humiliated for taking a stand. It was Courage that reminded these men and women what they were fighting for. He showed them that even though some would lose their lives in the process, their posterity would enjoy the fruits of a democratic country.

Courage will also be remembered for walking with individuals like the late Wangari Maathai who fought greedy and self-centered individuals and organizations that were hell bent on robbing future generations of their inheritance; a safe, clean and functional eco system. Today we enjoy the benefits of her sacrifice and our children will grow up in a clean, unpolluted environment.

You will remember Courage when he walked with individuals like the late John Michuki who dreamt of a safer public transport system. He put his foot down and refused to give in to pressure from the stakeholders in the sector. Today, his legacy lives on; public transport is orderly, safer and more comfortable than we could have ever imagined.

Before his demise, Courage has also been living in heroes and heroines who are still alive today. He was living in the GSU officer who chose to reason with rioters during the post-election violence period instead of using violence. Courage was at the center of the people who fought for this country to have a new constitution. He was in leaders who resigned from high positions because they did not want to be part of “the rot.” Unlike the famous “I’d rather die than resign” kind of leaders we are used to

Courage, if you can remember, has over the years put Kenya in the global map as he inspired many athletes to push themselves enough to win races and marathons. He has restored the pride we have in our country when our athletes have carried the Kenyan flag high every year. From the track to the swimming pool to the volleyball court the Kenyan flag has continued to soar. 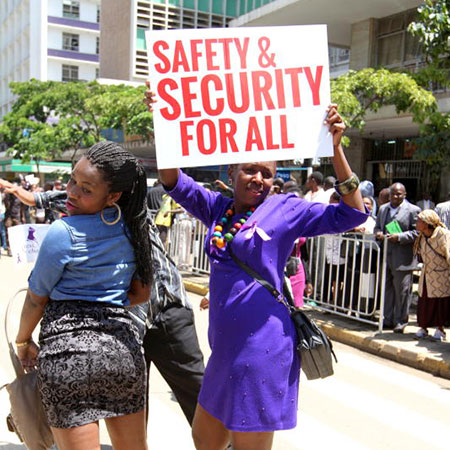 You too interacted with Courage a couple of times and can tell of his friendship. When you went out to demonstrate and demand justice over grabbed land, justice for rape victims and other seemingly ‘small’ injustices. You refused to keep quiet when something was not right. You let your voice be heard and when it wasn’t you, joined like-minded individuals to make it even louder. You brought the fight for justice home and into your networks, including social media. Any platform you got, you raised your voice and demanded justice. Thanks to Courage, your voice was heard, and you made a difference.

It took courage for you to wake up early that election morning to go vote for a new constitution and for a leader you believed in. You believed in the need for change and you actioned your belief. You chose leaders who had the courage to declare that they had what it would take to change the status quo. Courage made you see the benefits of your choice and you took the risk.

In his last days however, Courage lived a very lonely life. We all abandoned him and made deals with his enemies; fear and selfish ambition. We soon became cowards who only thought about themselves. We refused to respond to people who cried for our help and told ourselves that it was someone else’s responsibility. We built higher walls around our homes and around ourselves to keep people out.

We soon joined networking forums not to offer others anything but to find out what they could offer us. We became selfishly competitive to the point of sabotaging colleagues so that we would look good. We stopped being courteous on the roads or anywhere else. Our selfishness became so severe that we started selling out our country and freedom to the highest bidder or just any bidder. We turned our back and hid our faces to injustices. We hid in our religious institutions saddened by how evil seemed to be thriving around us wondering what ill equipped simple people like ourselves could do in such times. Soon our country became the prey for terrorists, rapists thugs and land grabbers. We saw evil but shut our mouths to it and slowly Courage grew weaker and weaker.

Our leaders stopped listening to Courage. They forgot that Courage had once taught them that they were the heroes chosen by the people to fight injustices in society. They too became “crowds for hire” even at the cost of the mwananchi. They unanimously appointed a public servants who played to their tune and turned down qualified personnel that would bring the much needed change in the country. They ganged up and looted the country at any given chance.

So dear brethren, we are gathered here today to say goodbye to our departed friend. Our unsung hero who lived his latter years as a lonely, abandoned old man despite all that he helped us achieve over the years as individuals and as a country. Let us take this time to honor him by remembering all that we have lost in the demise of a dear friend, Courage.