“Mzee Kenyatta would have preferred a less violent way but enough was enough. There was no stopping us. We were under oath, we were ready to die. In fact, we had sworn that we would rather all die and let the mzungu have no one to rule. Those who broke their oath and betrayed our cause died and those who did not still suffer the consequences to date. We were long dead before the begun rebellion.” 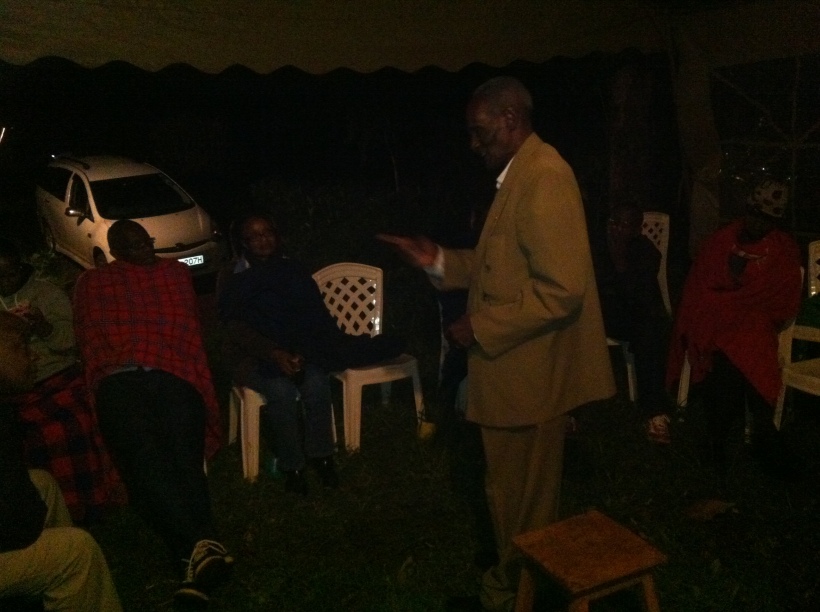 It’s a cold night in Nyeri and we (The Nyoras – My Extended Family) are sitting under a tent attentively listening. The ladies are cooking at an open kitchen near the main house as the men roast meat near the tent. We cuddle together under the few blankets available feeling guilty that the old but upright-standing man in front of us is only wearing a suit. As he introduces himself, you can see most of his teeth are intact. He pauses every so often to smile and laugh heartily. Obviously, he is a happy man. As he begins to tell his story, we all lean in as if attempting to see his words.

Stanley Muriithi, known by the Mau Mau as General Smart, introduces himself first as a Born Again Christian who prays daily; that after he has fought the good fight here on earth, that he would be found worthy by God of the next life. That has become sole his purpose of living. Before he tells us how he joined the Mau Mau movement, he begins by telling us a brief history of how the white man, popularly referred to as ‘Mzungu’ ended up in Kenya. Stanley’s father, Mukabi, was employed by Delamare, a wealthy Mzungu from Gilgil. He got his name “Arm Bearer” from the fact that he had learned how to use a gun to keep off wild animals while he looked after Delamare’s cattle. In those days Africans were allowed to keep livestock but the white settlers kept pushing them further and further from their homes after which they would fence off the land as their own. Within a short time, the white man had amassed huge chunks of land and the local Africans had been displaced.

When the young men who had enrolled to fight in the World War finally came back home and found that their parents had been displaced and their farms taken over by white settlers, they were deeply troubled. It took most of them years to reconnect with their families. The fact that they did not get the hefty perks they had been promised when they enrolled to fight made things even harder. They were furious. They would later form a party Kenya African Union (KAU) to fight for their rights. Mzee Kenyatta was sent abroad by this party to plead the case of Africans and the injustices they were suffering under the arms of the white settlers. 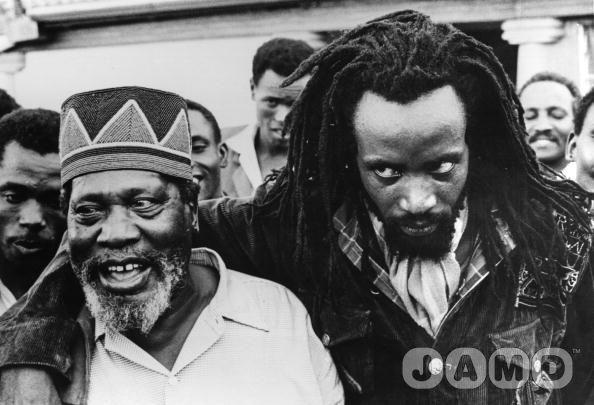 On 12thNovember 1951, Mzee Kenyatta met the Mau Mau movement in Kiganjo. They took him to a granary, where they hid their weapons. When Mzee Kenyatta saw the weapons he asked his colleague and confidant Mzee Jesse Kariuki, “What are these for?” Mzee Jesse explained Mau Mau’s resolve to rebel against the mzungu and told Kenyatta that every one of those 626 guns he was looking at had an owner who was under oath and was ready to die for the cause.

The Mau Mau devised a strategy that would paralyze the economy. No one would buy any products sold or produced by the mzungu. From cigarettes to popular hats worn by men. If whatever one wanted was not provided by a native, then the alternative was to get it from an Indian shop. Alarmed, the colonial government responded by announcing a state of emergency and started arresting people who were aligned to the Mau Mau. Many were arrested while others beheaded.

This however did not deter the Mau Mau’s resolve for independence. As the Mau Mau prepared to leave their homes and go into the forest, leaders were identified to take charge of different groups. Young men were in charge of recruiting new people to take the oath and join the movement while women would cook and take the food to different groups in the forest. Well-equipped make shift hospitals run by police doctors were established for those who would get hurt in battle. 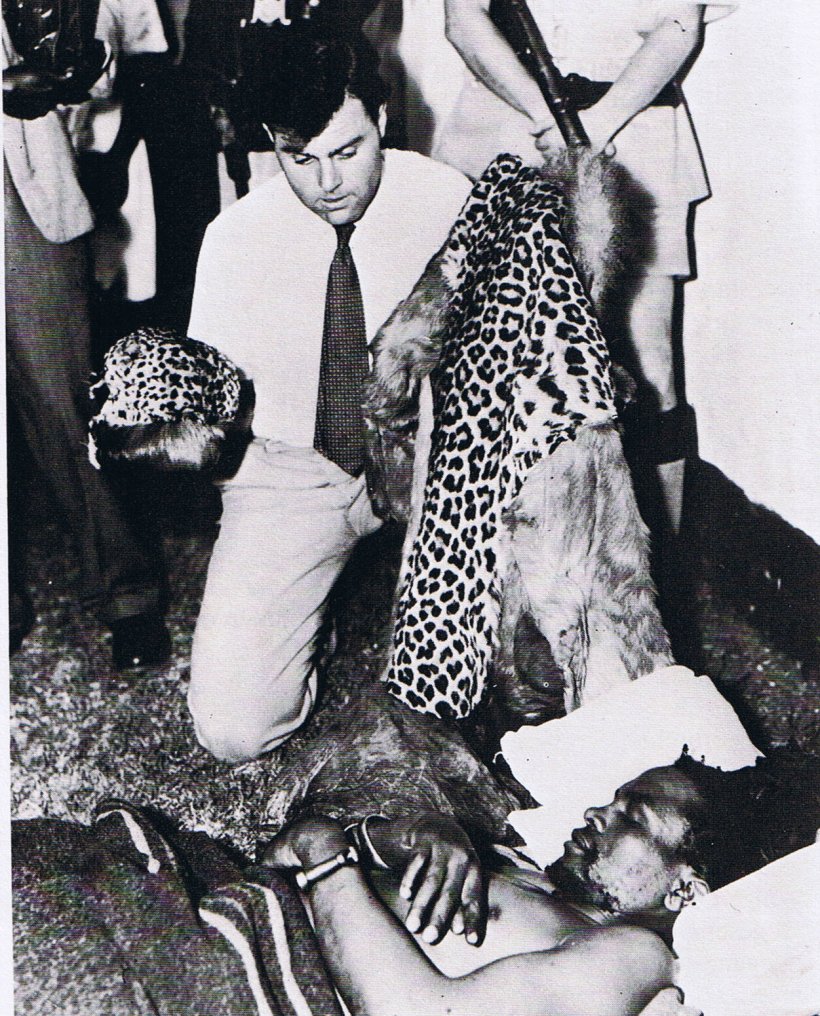 Freedom Fighter Dedan Kimathi with his leopard skin regalia after he was arrested. He was later hanged at Kamiti

General Smart, who was in charge of the armory evaded arrest a couple of times in which he credits to God watching over him. He recounted how he used to carry a gun (Ka-minor) tucked in between his thighs. One time, the soldiers came looking for him accompanied by local teachers who knew him well. They asked everyone to line up and show their identity. Even though the teachers knew General Smart very well they could not identify him.

The soldiers then started checking everyone’s identity cards. General Smart knew his time had come and unbuttoned the guns sheath ready to fire. When they came across a man named Kimathi, they assumed that it was one of the most wanted Mau Mau leader Dedan Kimathi. They all ambushed him in a bid to find out who he really was. While they were all distracted, General Smart slowly walked over to the other side where the soldiers had already checked the IDs. When they finally realized that it wasn’t Dedan Kimathi, they went on to check the remaining IDs oblivious of the fact that General Smart had already moved to the front of the line. Another time as he was being chased by the soldiers carrying two guns he hid under a Somali woman’s dress as she sat outside her house braiding her hair.

General Smart was eventually captured after a colleague exposed him. Mzungu soldiers accompanied by the home guards arrested him and after his colleague identified him, he was shot and left for the dead. The last thing he remembers before blacking out was the smell of fried meat. He was unconscious for four days. When he regained consciousness he woke up to find himself lying under dead bodies with safari ants and flies everywhere. It took another three days for him to get help. Jackals and hyenas would sniff him and walk away as elephants made a stop at a nearby tree, every so often to scratch themselves. 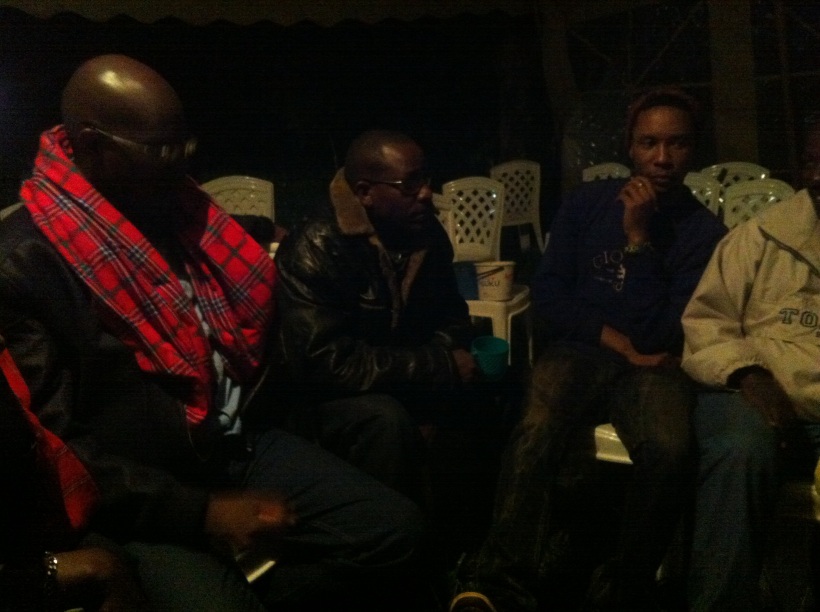 After nine days with the dead General Smart was rescued and even before he learnt how to walk again the colonial soldiers came back for him and demanded that he shows them where the Mau Mau hid their weapons. He was later taken to Kapenguria prison for almost a year after which he and 26 other prisoners were later transferred to Mackinnon Road detention camp in 1954 where all sorts of inhumane torture was administered. While at Mackinnon, many Mau Mau’s died from typhoid and other diseases because they were forced to stay naked as they served their sentence. General Smart remained in detention for six years.

Even though independence eventually came, it was not without a cost. Thousands of lives were lost and a lot of blood was shed. General Smart talked in depth about many of his experience that cannot be put into words. But as he concluded his talk, we could not help but wonder what happened along the way because today Kenyans live their lives way below the standards that Stanley Muriithi – General Smart – and others fought and lost their lives for. They certainly did not lose their lives for us to be selfish and corrupt enough to sell our country at any cost.

To listen to the Gen. Smart’s narration (in Kikuyu) click on the link below: