I had not planned to attend the Mater Heart Run this year but Mr and Mrs Soxxy “coerced” me to sign up and buy the tshirt. After that there was no turning back. I had a week or so to get in shape and if you are like me and your CBD (tummy) has not been devolved yet, then you know walking or running can be quite a task. (Children, stay away from bacon it’s not from heaven.) I also managed to drag along my girlfriend Ciku hoping she would offer the much needed moral support. 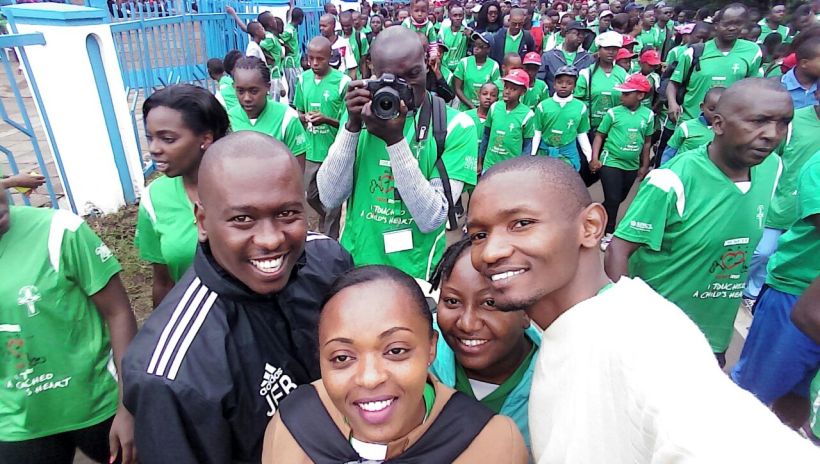 The “run” (herein forthwith referred to as “walk”) started at around 9am. The turnout was great as the entire Nyayo stadium was painted green. In fact you couldn’t get into the stadium without having bought the t-shirt. I had an issue with that especially because you cannot force people to give to a worthy cause. That is a story for another day. To mark the beginning of our worthwhile venture we took a selfie.

It always feels nice and sort of rebellious to walk in the middle of road. I know that seems vain in comparison to what others do in the name of rebellion but I admit I was very tempted to start yelling “Haki yetu”! At the Uhuru Highway and Haile Selassie Avenue roundabout you could only see hundreds of green t-shirts. Most of us may have misread the objectives of the event because we never saw a single person running.

It was a beautiful sight to see children as small as three years walking hand in hand with their parents obviously distracted by the presence of many ice cream vendors. The youngest of them all was a few months old being pushed in a pram with not even a care in the world. Some parents seemed to give in to the tantrums of their children quite early while others managed to control their children’s thirst. They were not the only ones, Soxxy’s wife Anne and Ciku were beginning to rationalize the temptation as well. But not Soxxy and I. We knew why we were there. We were focused. 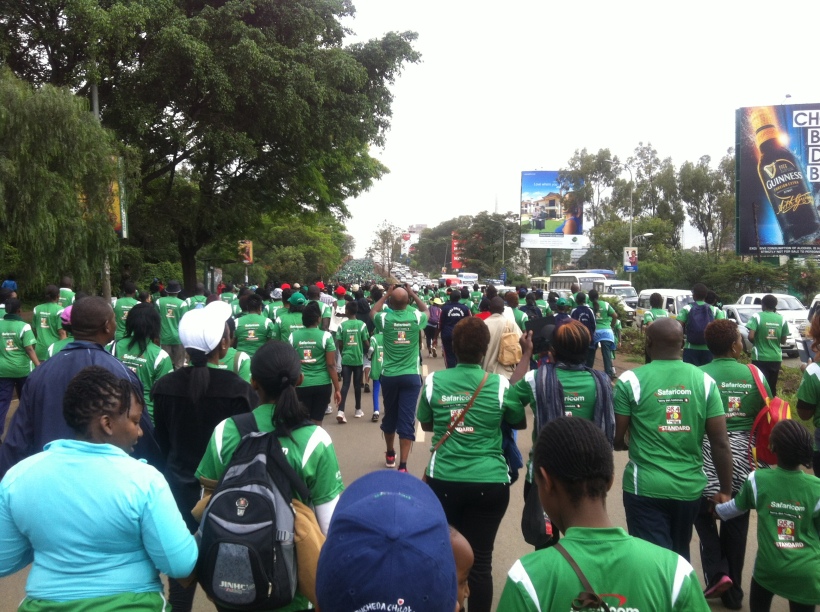 The first water point was a few meters after the Kenya Railways Club. We decided it was not yet time to start drinking water. We were of course thinking like the professional walkers we had become. This water point however changed our conversation for the better part of the walk. It’s not just our conversations that changed, our mood and perception did too.

One or two bottles littered here and there didn’t raise much alarm at first but when the entire road was covered in hundreds of plastic water bottles and plastic seals then there was reason for concern. We initially rationalized the littering saying that there was a cleaning company whose contribution to the event was to collect the litter during and after the run. But soon even that thought became unsettling.

The first thing we noticed was that most of the bottles that had been thrown away still had a lot of water. We began to ask ourselves why anyone would take a sip or two and then throw away the rest. Was it because water was readily available or was it because the 300ml bottle of water was too heavy for them carry? Was it because most of us took two or more bottles only to realize later that we weren’t that thirsty after all? Whatever the reasoning, it was very inconsiderate and wasteful of us.

The other thing we noticed, was that at all the water points, there were huge dustbins availed for obvious reasons. Most of us did not even notice them. We grabbed the water, broke the seal, dumped it, drunk the water and disposed the bottles wherever we deemed fit. Why would we leave garbage bins behind only to go litter a few meters away? How much time would it have taken us to open the seal and dispose it appropriately in the provided bins? How long would it have taken us to drink up the 300ml water and then disposed the bottles in the bins before proceeding with the walk? How heavy were the bottles that we couldn’t carry them to the next water point and dispose them properly?

Our conclusion was, there is a huge problem. We are not a responsible people. The run helps to raise funds to cover expenses for heart operations for deserving children. This is by all means a noble and worthwhile cause and everyone should support it. While we are engaged in changing the lives of these young ones, we also need to think about their future and ours too. What will become of our home if we don’t take care of the environment?

Someone once said we only have one earth and there is no planet B. There were many parents who by littering in the presence of their children unknowingly taught them a lesson that will probably take years to unlearn. Indeed, children learn what they live. The same applies for the parents who saw their children litter and never reprimanded them carefully explaining to them the need to conserve our environment.

For the rest of us who knew what we were doing and still went ahead and littered, our case is sad. It’s even sadder for those of us who thought that there was a cleaning company whose sole responsibility was to clean up after we had intentionally littered. When will we realize that this is our home? When will we wake up to the fact that there is no backup environment “saved” somewhere that we can revert to?

It is presumptuous and wrong for us to think that it is someone else’s work to take care of our environment. It is my responsibility and yours to make sure that as far as we are concerned we have done our bit to take care of our environment. Only then can we point a finger on our leaders when they don’t do their bit. So we did save a child through the run on Saturday, but by ruining the environment that child will grow up in we ruined the same heart we ran to save.

We set out to be part of a big vision and we ended up being part of an even bigger vision. The Mater Heart run taught us what really matters. Now it’s up to you and I to run with the vision of saving as many children as we possibly can be also taking care of the environment that will be their home and that of their children’s children.

4 thoughts on “The Heart Ruin Run”