The service industry in Kenya is very wanting. Whatever happened to “The customer is always right”? Why do businesses think they are doing the customer a favor by providing certain services? How many times have you endured bad service and still ended up paying for it?

Public transport is the worst when it comes to customer service. I actually think there is a lot of potential in the Railway Industry that the government should consider investing in. Trains are much faster cheaper and have a bigger passenger capacity than matatus. Matatus have completely lost value for customers. Getting a matatu these days is like being kidnapped. You will be dropped where they want and since you don’t know how much they will charge at any given point, it’s no longer fare, its ransom!

I used to like Double M buses because they were comfortable, quiet and the staff were very professional. Not anymore. One day, I boarded a Double M bus at night only to discover it did not have head lights. I was seated in front. I prayed all the way to Buruburu. That was my parting shot. Once in a while I will use them but only during the day. On most occasions, my preference is KBS buses.

So the other day I decided to board the “Famous, Funky, Fifty-eight matatus” (Buruburu). Let’s just say I am much wiser and more grateful to be alive. First, we used an unfamiliar route, then we did speeds that made it very difficult to blink or breathe and the music was so loud I could feel my intestines in my throat!

That’s not all. When we got to my stage, I told the conductor that I was alighting. He looked at me and then continued to count his money (oh, and I paid KES60 instead of the normal KES50). I thought the music was too loud and so I moved closer to him. He looked at me as if I was a tourist and then told me that the matatu was an express one. What that meant was that it would have to go all the way to its final destination first and then the rest of us would alight on its way back to town. Believe it!

It took me an extra 40 minutes for the matatu to bring me back to my stage! Say it with me, “The customer is (used to be) always right”. So let me break it down for you so that you see my frustration. I paid more, was driven recklessly, had to endure very loud music and had to go to a place I wasn’t going to get to where I was going. If that isn’t madness surely, what is? 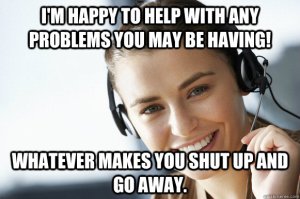 How many times have you as a customer paid for poor services. Some customers have paid for food that they did not order or wasn’t made to their specification. Others paid and did not get the service they paid for or got it too late, while others went into loses because they did their part but the service provider delayed delivery.

I can’t tell you how many times I thought to myself, “is this a favor, or my right”. Kenyans have a great culture of empathy.  We are very understanding. But that shouldn’t be a reason for service providers to “make mistakes” without amends. People get married once so if you mess them up that day… you have messed the only chance they had to married. I don’t have time to wait for the waiter to call the manager and discuss how I will get another meal since you messed up my order that took you half an hour to prepare.